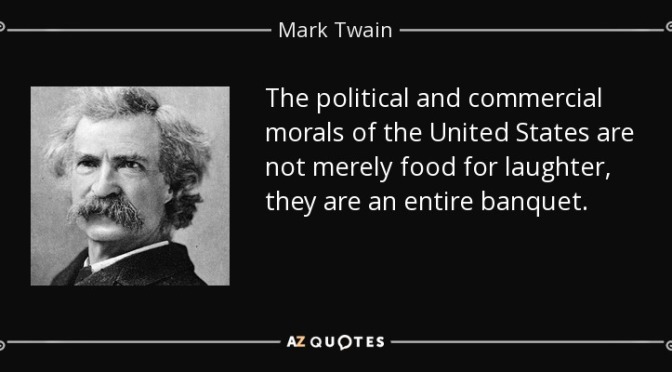 We fool ourselves if we think the campaign commercials are over now, or that the campaigning is limited to the two months leading up to election day.

The United States has just endured the most expensive midterm elections in history.  Most of us are tired of campaign commercials and are glad that they no longer run on television.  But we fool ourselves if we think the commercials are really over or that the campaigning is limited to the two months leading up to election day.

The commercials continue, if only in different forms.  Political commercials have, somehow, taken over nearly every facet of our lives and every activity we experience.  This infestation has happened so gradually that we barely notice how thorough the campaigning has become.  We complain about “media bias” and “mixing politics with entertainment,” but we are still mired in the trees and do not see the forest.  But the forest has overgrown into every aspect of our leisure time.

On television, the real commercial is found in the programs more than the nominal commercial breaks.  Network programs plug socialized medicine, either with some fawning reference to the Canadian system or complaints about prescription drug prices and “big pharma.”  For nearly two decades, virtually every prime-time show has featured gay characters politicizing their orientation.  Police and legal shows advocate increased immigration while claiming that unlimited immigration is somehow the law.  Popular sitcoms feature promiscuity while ridiculing those who fail to be promiscuous.

The point is not simply that television features bad things.  We already knew that.  The point is that television programs are little more than commercials for promiscuity, unfettered immigration, socialized medicine, gay rights, and the rest of the Democrat agenda.

Movies are not at all different.  Every movie (with a few marginalized exceptions) revises history in some way and serves as a Democrat campaign commercial.  The Academy Awards are today’s equivalent of Orwell’s “two minutes hate” against Republican politicians.

For those who seek refuge in sports, the NFL and its broadcasters have surrendered completely to the Democrat platform.  The NFL is unable to stop the National Anthem protests, while the sponsors embrace the protesters.  The athletes make headlines by refusing to attend White House functions during GOP administrations.  The NFL uses its tremendous leverage to bully state and local governments to adopt certain policies.  The NFL refuses to run ads by the Border Patrol during the Super Bowl.  Broadcasters often refuse to say they word “Redskin” for fear of offending someone.

Music is no less political.  Popular songs have advocated promiscuity and drugs for many decades.  The music award shows are as political as the Academy Awards or the Emmys.

A Republican vice president cannot attend a Broadway musical without being shouted at and insulted by the cast during the performance.  Classrooms have long been platforms for leftist advocacy.  Honest dissent is squelched.  Speech codes are enforced.  Admissions are politicized.  Truly free speech is shouted down by protesters.

Published books have also become little more than leftist commercials.  Observe the shelves at a major bookstore.  A few “conservative” books appear on the “Politics” shelf.  But the leftist books can be found throughout every department of the store – gender studies, history, education, psychology, sociology, fiction, environmental studies, sports, religious studies, arts, etc.  Those books, no matter how varied their subject matter, have one goal in mind – selling the Democrat message.  The gardening books advocate hiring illegal aliens.  The sports books reminisce about Vietnam.  The commercials never end.

Even your personal computer’s home page is locked to the scrolling “feed” chosen by Microsoft, with all of its MSNBC anti-Trump headlines and pictures.  The same content scrolls across the flat screen behind the tellers at the bank and many other businesses with a lobby or waiting room.  MSNBC’s images and political messages are seemingly inescapable.

The same commercial runs from the time we wake up (the morning talk shows) through dinner (the evening news) until we go to bed (the late-night “comedians”).

With every one of these examples – music, movies, television, books, education, sports – the conservative viewpoint is treated like the “other leading brand” in the old commercials for household products.  The story is rigged against conservatives, and the outcome of each movie, show, and song is pre-ordained.  If you spend your money or time on popular culture, you will see the Democrats beat your “other leading brand” almost every time.

Should we stop watching all movies, television, and plays?  Should we stop reading books?  Avoid college for ourselves and our children?  Boycott popular culture until it changes?

The answer is “no.”  A boycott is meant to force someone to do what we want.  But the left will never truly change.  Leftists will become cleverer and subtler.  Their movies and books and songs will always be thinly disguised commercials.  We must abandon the idea that we might someday return to our beloved television sets after we force the left’s hand.  The television that we knew is gone – if it ever really existed.  We must recognize that fact and find something new.

Our desire for entertainment and enlightenment can be satisfied with something other than television and the rest of today’s popular culture.  Popular culture is, by definition, what we make of it.  If we find something else instead of accepting whatever the establishment spoon-feeds us, the culture will change.

Many books are so old that they predate the standard Democrat commercial.  Almost every book ever written is available from internet sellers or interlibrary loan.  We have the whole world at our fingertips.  Why should we limit ourselves to the latest releases while old, quality books collect dust in some basement or warehouse?

The same is true of television and movies.  There were better programs and movies many decades ago.  Those movies are still available to entertain you and provide perspective.  You can find them if you would only look.

We cannot force football players to love their country.  The NFL apparently will always be a platform for those who do not respect the flag, you, or the country as a whole.  The commercial will continue.  The only question is whether you will pay to endure that commercial.  In the past two years, NFL ratings and attendance have declined.  Unless you have developed a gambling addiction through your fantasy football league, there is no reason to devote your Sundays to the NFL instead of joining your fellow consumers in finding something else to do.  Instead of boycotting with the hope of coming back later to a new and improved NFL, we can abandon the commercial completely, thus freeing ourselves once and for all.

The permanent commercial can continue only with the help of your money and time.  You can pay to see the same commercial every day in every movie, book, song, and sporting event.  Or you can turn off the commercial.

It is time to starve the beast.  This year’s elections serve as a reminder that we have more than a political reason to do so.  We have the added benefit of freeing ourselves from the never-ending commercial that our popular culture has become.

Source: Are You Ready to Stop Watching the Never-Ending Commercial?