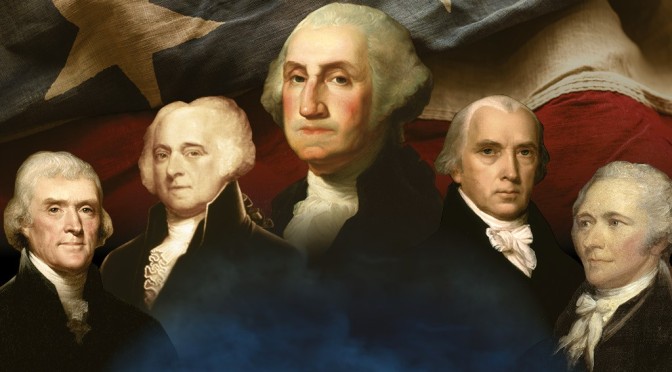 It’s hard to imagine the Christmas season without evergreen trees, decorations, lights, stockings, Santa Claus, Christmas cards, and stacks of gifts for family and friends. Today, most Americans take these traditions for granted.

But when the United States was founded, Christmas was not celebrated the way it is today. While the birth of Christ was honored, and faith was central to the lives of many founders, History.com points out many popular Christmas traditions didn’t start until the 19th century. And Christmas was not even a federal holiday until June 26, 1870.

As Time Magazine noted, December 25 was so inconsequential in early America that after the Revolutionary War, Congress didn’t even bother taking the day off to celebrate the holiday, deciding instead to hold its first session on Christmas Day, 1789.

Even though the new nation did not celebrate Christmas as we do, the men who were the founders and early leaders of the United States celebrated Christmas with their families and also wrote extensively about their faith in God and Jesus Christ, his son.

What Our Founders and Early Leaders Thought of Christmas, Jesus, and the Bible

Washington celebrated Christmas with his family at Mount Vernon. According to the Mount Vernon website, instead of celebrating on a single day, the Washingtons celebrated a holiday season beginning on Christmas Eve and lasting 12 days till Epiphany or Twelfth Night on Jan. 6.

In November of 1783, Washington found out the treaty with Great Britain had been signed and the long war for American Independence was over, according to the Mount Vernon website. He rode to Annapolis to meet with Congress and resign his military commission. While he was in the city, he bought several Christmas presents, including a locket, three small pocketbooks, three thimbles, three sashes, a dress cap, a hat, a whirligig, fiddle, gun, and quadrille boxes. Quadrille was a game of cards using an ordinary pack but with the 8s, 9s and 10s removed, and it became popular in the early 1700s. The quadrille box was probably a place to keep modified packs of cards, according to British History Online.

Washington also wrote about his faith. The following was written in his private prayer book.

“O most glorious God … Direct my thoughts, words, and work, wash away my sins in the immaculate blood of the Lamb, and purge my heart by thy Holy Spirit…. Daily frame me more and more into the likeness of thy Son Jesus Christ… Thou gavest thy Son to die for me, and hast given me assurance of salvation.”

Decades before he would become a founding father of a new nation, Benjamin Franklin noted in his Poor Richard’s Almanac in 1733, “A good conscience is a continual Christmas.”

Writing in his almanac in 1743, he would also leave the reader with this piece of advice:  “How many observe Christ’s birth-day! How few, his precepts! O! ’tis easier to keep Holidays than Commandments.”

Responding to Ezra Stiles shortly before his death in 1790, when he was asked about his religion, Franklin replied: “I believe in one God, the creator of the universe. That he governs it by his Providence. That he ought to be worshipped. That the most acceptable service we render to him is doing good to his other children. That the soul of man is immortal and will be treated with justice in another life respecting its conduct in this.”

“As to Jesus of Nazareth, my opinion of whom you particularly desire, I think his system of morals and his religion, as he left them to us, the best the world ever saw or is like to see,” he wrote.

According to White House History, the first White House Christmas party was held in December 1800. President John Adams and First Lady Abigail Adams held it for their four-year-old granddaughter Susanna Boylston Adams, who was living with them. They invited government officials and their children to the party.

Like many people today, Thomas Jefferson thought of Christmas as a time for family and friends. As the website of his home, Monticello, reports, Jefferson even used the word “merriment” when he wrote about Christmas. In 1762, he described Christmas as “the day of greatest mirth and jollity.”

Jefferson also wrote about celebrating Christmas with his grandchildren. On Christmas Day 1809, he said of eight-year-old grandson Francis Wayles Eppes, “He is at this moment running about with his cousins bawling out ‘a Merry Christmas’ ‘a Christmas gift’ Etc.”

Jefferson also wrote his friends about his faith.

“I am a Christian in the only sense in which He wished anyone to be: sincerely attached to His doctrines in preference to all others. … I am a real Christian — that is to say, a disciple of the doctrines of Jesus Christ.”

But during Jefferson’s time at the White House as the nation’s 3rd president, it was Secretary of State James Madison’s wife Dolley, who became the official hostess for Christmas, because President Jefferson was a widower, according to White House Christmas Cards.

According to the website, during the Christmas season in 1805, Dolley invited six of Jefferson’s grandchildren and 100 of their friends to what became a joyous holiday party where the President played the violin while the children danced.

When Madison succeeded Jefferson as president, the celebration of Christmas at the White House continued with parties hosted by First Lady Dolley. White House Christmas Cards also noted her holiday attire would usually include some purple peacock feathers atop a turban or cap covering her hair, along with her dress of lace and pink satin. Although there were neither White House Christmas cards exchanged nor a decorated Christmas tree in those years, the holiday tradition would include wonderful things to eat, including seafood, stuffed goose, Virginia ham, and pound cake.

The Madisons continued their Christmas holiday celebrations after retiring from public life to Montpelier, their home in Virginia. The yearly tradition of sending Christmas cards hadn’t yet caught on with the public at the time, but the Madisons and their relatives and friends wrote letters wishing each other the best sentiments for the holidays.

Here is a note that was written by Dolley Madison for her nieces early in 1836: “A thousand wishes for your happiness and prosperity on every and many Christmas days to come!” according to the website.

The 6th President of the United States, John Quincy Adams, used a large patriotic gathering on July 4, 1837, celebrating the 61st anniversary of the Declaration of Independence to talk about Jesus Christ and his birth.

Adams, the son of John Adams, the 2nd president of the United States, asked his Newburyport, Mass., audience a question and then responded, answering his own question.

“Why is it that next to the birthday of the Savior of the World, your most joyous and most venerated festival returns on this day on the Fourth of July?” Adams asked.

“Is it not that in the chain of human events, the birthday of a nation is indissolubly linked with the birthday of the Savior? That it forms a leading event in the progress of the Gospel dispensation? Is it not that the Declaration of Independence first organized the social compact on the foundation of the Redeemer’s mission upon earth? That it laid the cornerstone of human government upon the first precepts of Christianity?” he continued.

A PRAYER BY GEORGE WASHINGTON

This prayer is used regularly at “The President’s Chapel” of George Washington University and voices the aspirations of the University for the fulfillment of civic duties and the promotion of national welfare:

Almighty God: We make our earnest prayer that Thou wilt keep the United States in Thy holy protection; that thou wilt incline the hearts of the citizens to cultivate a spirit of subordination and obedience to government, and entertain a brotherly affection and love for one another and for their fellow-citizens of the United States at large. And finally that Thou wilt most graciously be pleased to dispose us all to do justice, to love mercy and to demean ourselves with that charity, humility and pacific temper of mind which were the characteristics of the Divine Author of our blessed religion without a humble imitation of whose example in these things we can never hope to be a happy nation. Grant our supplication, we beseech Thee, through Jesus Christ, our Lord. Amen.