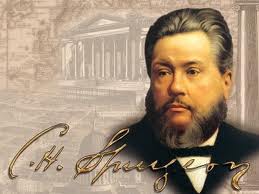 “Fear ye not me? saith the Lord: will ye not tremble at my presence, which have placed the sand for the bound of the sea by a perpetual decree, that it cannot pass it: and though the waves thereof toss themselves, yet can they not prevail; though they roar, yet can they not pass over it? But this people hath a revolting and rebellious heart; they are revolted and gone.” Jeremiah 5:22-23

God here contrasts the obedience of the strong, the mighty, the untamed sea, with the rebellious character of his own people. “The sea,” saith he, “obeys me; it never breaks its boundary; it never leaps from its channel; it obeys me in all its movements. But man, poor puny man, the little creature whom I could crush as the moth, will not be obedient to me. The sea obeys me from shore to shore, without reluctance, and its ebbing floods, as they retire from its bed, each of them says to me, in the voices of the pebbles, ‘O Lord, we are obedient to thee, for thou art our master.’ But my people”, says God, “are a revolting and a rebellious people; they go astray from me.” And is it not, my brethren, a marvellous thing, that the whole earth is obedient to God, save man? Even the mighty leviathan, who maketh the deep to be hoary, sinneth not against God, but his course is ordered according to his Almighty Master’s decree. Stars, those wondrous masses of light, are easily directed by the very wish of God; clouds, though they seem erratic in their movement, have God for their pilot; “he maketh the clouds his chariot;” and the winds, though they seem restive beyond control, yet do they blow, or cease to blow just as God wills. In heaven, on earth, even in the lower regions, we could scarcely find such a disobedience as that which is practised by man; at least, in heaven, there is a cheerful obedience; and in hell there is constrained submission to God, while on earth man makes the base exception, he is continually revolting and rebelling against his Maker.

Answer: God’s servant Jonah—the rest obeyed God at once. This should humble us!