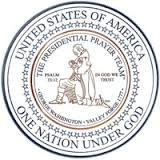 There is a movement afoot to completely secularize the United States, led by revisionists who would argue that the Founding Fathers were hostile to Christianity. Thomas Jefferson’s description of a “separation of church and state,” for example, has been twisted to ban prayer in public schools and force the removal of crosses from public property.

O God…our fathers have told us, what deeds you performed in their days, in the days of old.

Though their beliefs varied and not all were Christians, the Founding Fathers were firmly committed to biblical morality, to public prayer and praise, and to the conviction that God is the Creator of liberty. When the Revolutionary War was won, for example, George Washington ordered the military’s chaplains to “render thanks to almighty God for all his mercies, particularly for his overruling the wrath of man to his own glory, and causing the rage of war to cease amongst the nations.”

As you celebrate your freedom in God as a praying American this weekend, do not allow others to rewrite for you the true history of the deeds performed in the “days of old.” It is God who wins the battles and accomplishes His purposes. The Founders acknowledged this. May we never forget it!